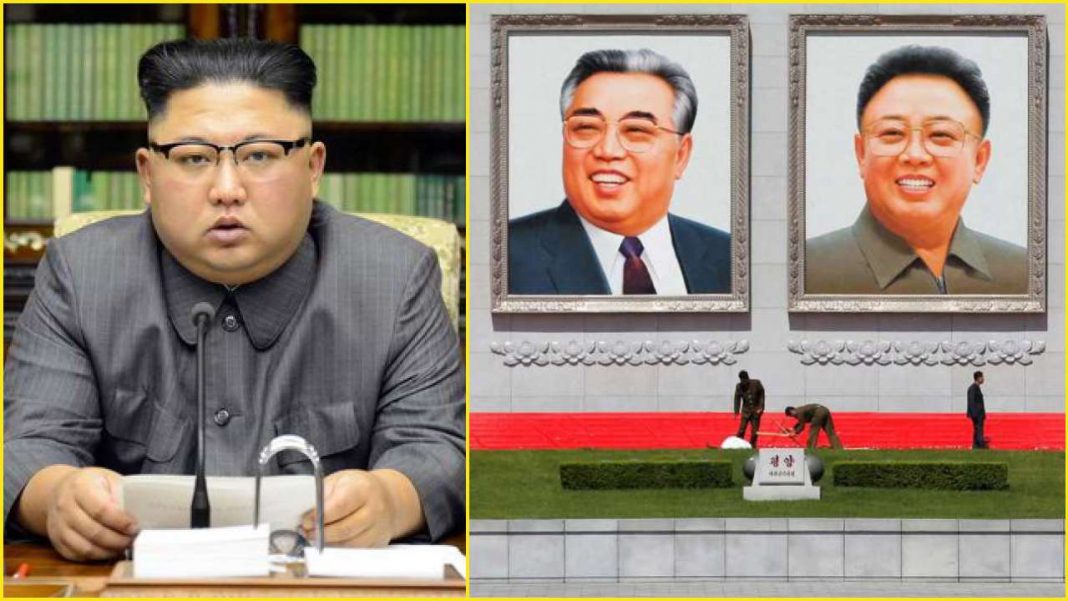 The term “weird” seems to be perfectly synonymous with the country of North Korea.

One of the few densely populated places on Earth that will appear totally black from a nighttime satellite photo (since apparently, no one has paid the electric bill or even reminded them about the existence of electricity since 1953), North Korea seems to go out of its way to make it the senile, batty old lady of the world today.

Without further ado, here are 7 weird but interesting facts about North Korea!

Rarely has there been a recreation area that did its best to deter tourism.  Breaking any of the rules here, which include no picture taking, looking at a military area nearby, or touching any of the statues of North Korea’s first president Kim Il Sung, can get you shot (which has happened!).

With the exception of some nice gardens, Kumgangsan really only has one thing going for it: The Meeting Hall for Separated Families, and that is not a typo.

Once a year, families separated by either the post-WWII partition or kidnapping by North Korean agents can meet and exchange news.

Most of these visits probably are along the lines of Northern relatives asking about all the new-fangled things in the South, like HD TV, food, and electricity.

2. Leaders, Both Past and Present, Are Treated Like Gods

When North Korea’s first president, Kim Il Sung, died in 1994, newscasts showed thousands of weeping citizens in the capital of Pyongyang on their knees in a state of almost worshipful sorrow.

Lady Gaga could provide sexual favors for every one of her fans and still fail to achieve a following of that magnitude.

Kim’s statue in North Korea’s capital, Pyongyang, is 50 feet tall and made of bronze, and one over 500 feet of him somewhere within the country, is the North Korean equivalent of Mecca.

When Kim’s son and next North Korean leader Kim Jong Il died in 2011, an equally tall statue was placed directly next to the one of his father.

Not too bad for a guy who looked like he could have helped Frodo in his quest to find Mount Doom!

3. The Streets Have Traffic Cops…But There’s No Traffic

Private ownership of a car in North Korea is about as common as being struck by lightning while waiting in line for your lottery winnings.

Yet despite a per capita car ownership rate of about 11 per 1,000 people, the traffic cop business is thriving.

Every intersection in Pyongyang is manned by a smartly uniformed officer who will duly blow his or her whistle and direct… nothing.

With the exception of the occasional bus or bicycle, an officer can expect to wave on a car every three to four days. One would think traffic lights would be more efficient, but again, that whole electricity thing…

4. They Made Their Own Monster Movie, Under Threat of Death

Pulgasari, North Korea’s answer to Godzilla, is not much different than any of the cheesy Japanese monster movies of the past.

With the exception of the fact that the director and his recent ex-wife were kidnaped from South Korea, jailed for 4 years, including time in solitary for an escape attempt, and then asked to make the film.

Considered to be spectacularly bad (even by Mystery Science Theater 3000 standards) Pulgasari at least had a happy ending.

The director, Sing Shang-Ok, and his ex-wife found that the combination of jail and constantly being surrounded by armed guards on the set was just the spark their relationship needed.

They re-kindled their romance and escaped, successfully this time, after a wild car chase in Vienna.

We wish those two crazy kids all the happiness in the world!

5. Their Only Naval Victory Was Over a Single Ship

The American electronic intelligence-gathering ship USS Pueblo was on patrol off the North Korean coast on January 23, 1968, when it was suddenly attacked by gunboats of the People’s Navy.

Armed with only 2 machine guns, the Pueblo fought bravely, but was eventually forced to surrender.

The ship was towed to Wonsan harbor and the crew was interned. It took a year of negotiation before the crew was released- but the North Koreans ended up keeping the ship.

Today, it’s a floating museum on the Taedong River, with exhibits treating the battle with only slightly less fanfare and glory than D-Day and the Battle of Midway combined.

Not bad for a country whose surface navy is made up mostly of armed water ski boats.

Begun in 1987 with funds and technical support from the USSR, the Ryugyong Hotel was meant to be ready for the 1992 Seoul Olympics.

In an attempt to one-up their southern cousins the Ryungong was to be the largest hotel in the world. With 3,000 rooms and seven rotating restaurants on the top, the Ryugyong Hotel would show those democratic, free-market South Koreans what for.

And maybe it would have… if construction hadn’t stopped in 1992 with the dissolving of the Soviet Union. For the next 16 years, the 100 story concrete monstrosity stayed empty and unfinished.

In 2008, an Egyptian firm took over and finished the exterior and a German firm took ownership in 2011 with plans to have half the room reserved by 2012.

According to the New York Post, the hotel was opened in 2017. A brightly-colored propaganda mural boldly proclaims North Korea to be the most superior nuclear power in the world.

But other than that, nobody knows anything about what that building is being used for.

7. An Invasion Tunnel Was Called a Coal Mine

When your Southern border is filled with 1 million land mines and tens of thousands of soldiers, how do you achieve your dream of reuniting your country into one socialist paradise?

Easy- you tunnel under all that nasty stuff.  This is all fine and good, except when your neighbors find it. When one such tunnel was discovered by South Korean soldiers, with a propaganda banner, the North claimed it was a coal mine.

Once again all well and good… except when you reside in a coal-producing country and even the most casual observer knows that coal is found nowhere near the level the tunnel was dug.

Easy to fix, though! Here’s how to do it…

Step 1: Paint some of the rocks black

Step 3: Hope that every single one of the reporters covering the story has been struck blind, deaf, and dumb

If you enjoyed this look at some weird facts about North Korea, please hit the “Share” button below! It really helps 🙂

Until next time, readers!