9 Famous & Strange Archaeological Finds From Around the World 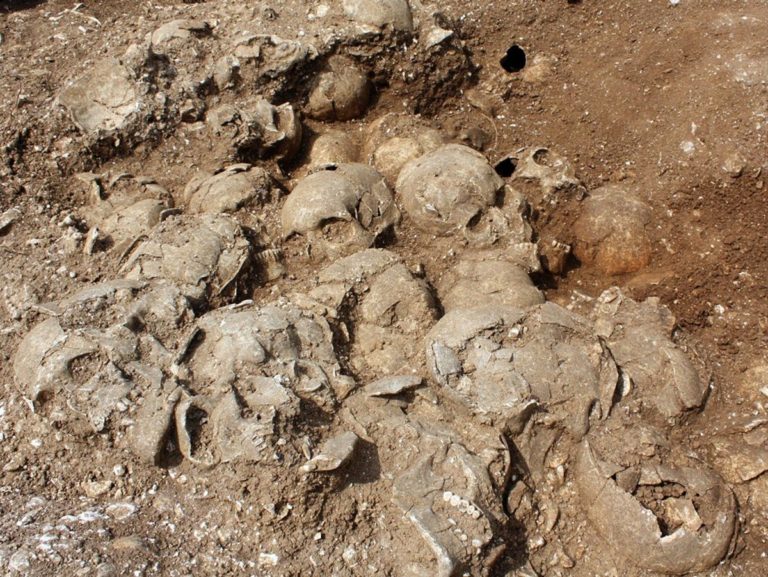 Our history lies beneath our feet, and hundreds of thousands of diggers are hot on its trail. It’s not all Indiana Jones for the average archaeologist, however.

Most of the work is boring, repetitive, muddy, and doesn’t end up changing our understanding or perception of history. But once in a while, these tenacious academics do happen on some spectacular, yet strange, archaeological finds.

An unassuming Leicester car park turned out to be the resting place of King Richard III of England!

But we at Kizaz are interested in the strange, the ghoulish, and the disturbing – and human history sure hasn’t been in short supply of that.

These 9 strange archaeological finds might have been better left undiscovered…

The residents of Onavas in the northern Mexican state of Sonora had a surprise in 1999 when they discovered a cemetery in their community.

The burials were old and were the first pre-Hispanic burial ground discovered in the state. But eyebrows started to go up when 13 of the 25 bodies came out of the ground with very pointy heads. They were soon dubbed “aliens.”

They are nothing of the sort, of course.

Rather, the coneheads are the result of a rather strange cultural practice from long ago. The tradition of forcing skulls to grow into strange shapes has been around since 45,000 BC.

Catching kids when they’re young and the bones of the skull are soft means you can force them to grow into any shape you want, though pointy and flat seem to be the most popular.

It’s often used to demonstrate privilege or social status – you know, “look at him, he’s one of the elite with that fabulous pointed head” – and seems to have existed at some point in almost all parts of the globe.

The people around Toulouse, in France, were still binding heads into the early 20th century.

The Mexican burial corpses were overwhelmingly young people, and archaeologists believe that they may even have been killed by over-enthusiastic head binding.

Archaeologists spend much of their time looking for bodies, but the close to 100 baby skeletons discovered in an Ashkelon sewer shocked the experts excavating the site.

The baby skeleton remains have been dated to the late Roman or early Byzantine period, and the dead babies had apparently been chucked into a drain soon after they died.

The state of the bodies’ teeth suggests they had died shortly after birth.

There is no evidence of some terrible disaster, and the scientists have concluded that this burial probably represents an outbreak of child-killing, the reasons for which they have yet to nail down.

Initially, they thought the babies were girls and victims of a male-dominated society, but DNA testing revealed that the majority of the bodies actually belonged to boys.

This led to a new theory that the mothers had been prostitutes who discarded male babies keeping the girls to follow them into business; the bathhouse above the sewer may have been a brothel.

But that theory has since been shot down too. The value of slaves was such that babies could be sold, rather than killed.

For now, this terrible piece of history remains a mystery.

#3: Underwater Pyramids in the Azores

The Azores have only been officially on the map since 1431. However, sailors may have been visiting the islands – and marking them on their charts – long before that, and there may be a much older civilization associated with the Azores.

The legendary sunken Atlantic civilization of Atlantis has been intriguing people for centuries, and that too has been linked with the Azores.

The Portuguese government says they can’t be man-made, but the navy is investigating, and archaeologists and fewer scientific investigations are sure to follow.

#4: The Headless Vikings of Dorset

When you’re digging up Vikings, you can expect a certain amount of violence to be evident.

But the 54 dead Vikings found in Dorset, UK was a different story. The Ridgeway Hill burial pit was discovered while archaeologists were digging in advance of a major road improvement project, and contained 54 bodies- but only 51 heads.

The bodies themselves had been dismembered and the body parts stacked by type. The men were discovered to have all been killed at the same time before being chucked, naked, into an existing Roman quarry.

High-tech archaeology and DNA testing identify the men as Scandinavians, and the killing dated to around 910 to 1030 AD. The victims had all been killed with a sword, but not cleanly.

There was a fair amount of hacking and sawing going around with duller blades.

Why the men were slaughtered in the first place remains a mystery. Vikings and Saxons were in pretty constant conflict in Britain, and in 1002, King Ethelred the Unready ordered the killing of all Danes in his kingdom in what became known as the St. Brice’s Day Massacre.

The men may have been raiders who were killed making their last stand, or defectors caught by their own side. Whatever happened at this gruesome sight, it seems at least a couple of the dead had their heads taken as trophies.

A Venetian body with a brick forced into its mouth opens the door to a simpler time. The woman was found in a plague pit along with a host of other bodies.

The stone in the jaw (pictured above) was a traditional way of exorcising suspected vampires at the time of her death in the 16th century.

The skull was found in 2009 and is the first identified vampire ever excavated. Vampires and witches were commonly sought out in early modern Europe.

Vampires were thought to be responsible for the spread of plague, and the way bodies decompose meant that many corpses were posthumously condemned and had the tell-tale rock shoved in their jaws.

A fair amount of research into the body had revealed that the suspected vampire was probably from the lower classes of the city but had reached the impressive age of at least 61 when she died.

Her age – in a time when most women died much younger – may have counted against her, and subsequently led to the accusations of witchcraft.

Spherical objects are pretty fundamental in human culture – we do live on a spherical planet, after all – and they obviously meant a great deal to the Diquis peoples of Costa Rica, who carved more than 300 perfect spheres and left them to mystify future generations.

Some of the balls are tiny, some are massive.

The largest weighs around 15 tons, and they’re carved from all sorts of local stone. They could have been created any time from 200 AD to the arrival of the Spanish, who would effectively wipe out the Diquis culture.

When the Costa Rica stone spheres were discovered in the 1930s, they weren’t treated with the reverence they deserved.

Some of the workers who found them started trying to blow them up to see if they contained hidden caches of gold.

Such strange objects have naturally attracted a fair amount of myth and legend.

Were they evidence of an off-shore Atlantis? Were they natural? Did their creators have some magical potion that helped them to produce such perfect work?

The stone spheres are believed to represent cannonballs used by Tlatchque, the Diquis God of Thunder, to fight Serkes, the gods of hurricanes.

The Antikythera mechanism is so advanced and so complicated that it took a century from its discovery in a shipwreck for it to be properly understood.

The Antikythera mechanism has been described as an “analog computer” dating from the 1st century BC, and nothing similar was made until the 14th century.

This astronomical clock was made by Greeks, probably from Corinth, and was used as a highly complex predictive device. Its host vessel was wrecked while the mechanism was still pretty new.

The Antikythera mechanism may have been being transported by Romans, along with other loot. Divers found the wreck of the Antikythera in 1900, but didn’t think enough of the lump or rusting metal that the mechanism had become to bring it to the surface.

An archaeologist picked it up a couple of years later and afterward found what he thought was a gear in the metal. It wasn’t until the 1970s that x-rays and scans were able to reveal the full complexity of its nature.

The study of the Antikythera mechanism has become a field in its own right, with several scientists trying to create working models in order to replicate the original functions of all those gears and cogs.

They’re still examining and extrapolating now on a machine that’s 2,000 years old and has taken over a century to understand.

Another example of ancient scientists knowing more than we thought they could be found in the so-called Baghdad Battery, which dates from the first centuries after Christ and may have been used to electroplate jewelry with gold more than 1,000 years before Volta invented the modern battery.

The Baghdad Battery doesn’t look like much, just pots with a copper cylinder around an iron rod inside.

The dating of the Baghdad Battery is uncertain, but it’s certainly true that all components necessary to produce a very simple battery are there.

The man who first promoted the battery theory – a German archaeologist called Konig – was inspired by a number of Iraqi silver finds that had been coated with gold, in a manner similar to the more modern practice of electroplating.

Konig’s theories have now been subject to a great deal of criticism, and many modern experts believe the jars were used to store scrolls.

However, experiments have shown that electroplating should have been possible, using the battery’s setup.

We all like a good mystery, but we generally want a solution at the end of the road. Sadly, the Voynich manuscript is still impossible to understand.

The manuscript was produced between 1404 and 1438 and is named after the book dealer who owned it early in the 20th century. But exactly what its 240 or so pages contain is still not known, despite the efforts of many of the world’s best code breakers.

Written in an alphabet largely composed of 20-30 symbols, statistical analysis shows the Voynich manuscript to be “language-like” in its design, but so far, no one has been able to break the code that lies within.

The book is illustrated with pictures of plants, leading some to believe it’s a herbal guide, but even these plants have not been definitively identified.

There are also zodiac signs, astronomical charts, and something that resembles ancient forms of maps.

The fact that an emperor and the notorious Elizabethan magician Dr. John Dee have owned – after paying a small fortune – the Voynich Manuscript definitively makes its innermost secrets all the more tantalizing.

Some believe the Voynich Manuscript is a hoax, while others believe that it is in a made-up language or contains only a small amount of useful, secret information buried by thousands of “words” of distracting nonsense.

Novelists love it, though, and anything this mysterious is bound to fascinate us for years to come or until it can be deciphered.