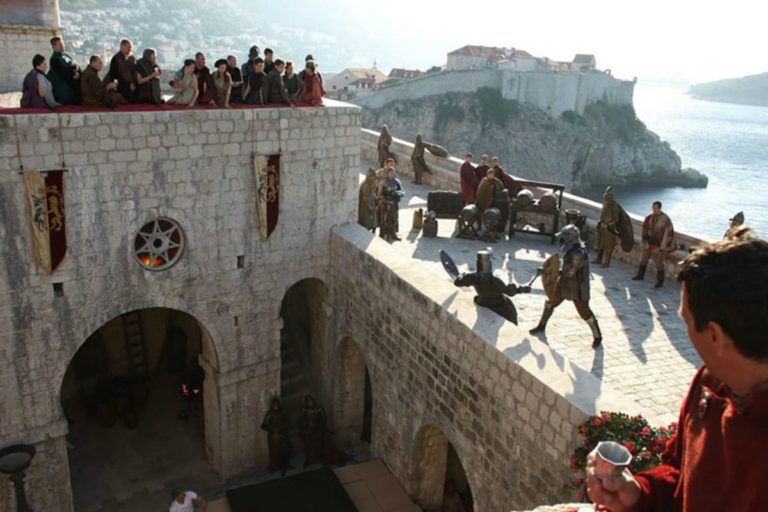 The hit HBO show based on George R.R. Martin’s Song of Ice and Fire novels has been a smash hit success, delighting and dismaying viewers with its telling of power struggles and political machination, not to mention its willingness to suddenly kill off central characters.

While the rich character development and the extremely well-known cast has made GOT popular with the fans, the show’s set designers and location managers have also been praised for bringing Martin’s world to life.

These are some of the real-life filming locations that were used in the making of Game of Thrones!

The red stone buildings of this Mediterranean island state set the scene for the crowded capital of Westeros and base of the Iron Throne.

This contrast was something the showrunners wanted to highlight, despite the books’ King’s Landing being more temperate, akin to medieval Paris or London according to Martin.

While Malta was the sole location for the filming of scenes in Kings Landing during Season One of Game of Thrones, the second season called for some different perspectives, not least as the city looked to the sea for the approach of Stannis Baratheon’s forces at the Battle of the Blackwater.

The castle-town offered many natural backdrops for the characters’ discussions, not least in Season Three where Sansa is offered the opportunity to escape the city by Lord Petyr “Littlefinger” Baelish.

Coincidentally also used in the classic Monty Python and the Holy Grail, Doune Castle was the principal location for Game of Thrones’ excellent pilot episode, specifically as interior and backdrop of Winterfell.

Interior locations were notably used in the Great Hall feast scenes following the arrival of King Robert and the royal party, while the castle can be clearly seen during the scene where Ned executes a Night Watch deserter.

One of many locations in the show’s principal filming location, Northern Ireland, Castle Ward acted as Winterfell’s courtyard in the first and second seasons.

These scenes contrast with exterior shots of the castle in the pilot, which were shot in Scotland as mentioned earlier, but a combination of suitability, convenience, and budgetary considerations meant that Castle Ward was a better choice for the ‘interior’ of the Stark stronghold than Doune Castle.

5) Iceland (The Land Beyond The Wall)

While the little we saw of the far north of Westeros in Season One was filmed in Croatia, the second and third seasons took the story of Jon Snow and the Night’s Watch deep into wildling territory, requiring larger, bleaker landscapes as backdrops for filming.

The show’s location managers picked out a brilliantly diverse range of locations in Iceland for these segments, including Þórsárdalur valley, Þingvellir, and Svínafellsjökull glacier, hiring nearly 300 locals as extras in both Night’s Watch and wildling scenes.

Situated on the Causeway Coast, the Cushenden Caves acted as the secret passage beneath Storm’s End in which the Red Priestess, Melisandre, gave birth to the shadow assassin which killed Renly Baratheon during his siege of the castle.

Witnessed by the Hand of Stannis Baratheon, Lord Davos Seaworth, this dark, and the atmospheric scene was our first glimpse into the power of Melisandre’s magic and the Lord of Light, R’hllor.

First used during the filming of the pilot, where an old set from the movie Kingdom of Heaven provided the basis for the Pentos scenes, this is where we are introduced to Dany, Viserys, Magister Illyrio, and Khal Drogo.

In Season Three, the crew returned here to film some limited parts of King’s Landing, as well as some of Dany’s scenes in which she acquires her Unsullied army.

The second of Season Three’s Morocco location, this city on the country’s west coast was used for many of the exterior scenes in which Dany travels through Slaver’s Bay between Astapor and Yunkai.

Perhaps most memorably, it was featured in the closing scene of the season’s finale, Mhysa.

In Season Two, we first get a glimpse of Pyke, the home of the Greyjoys and seat of the king of the Iron Islands.  For the scenes in which Theon arrives at and later departs from Pyke, Ballintoy Harbour on the northern coast of County Antrim is used.

Whether the location will be used in later seasons as the storyline turns to the Iron Islands once more is not yet known.

Just off the coast from Dubrovnik, Lokrum and its Fort Royal Castle featured prominently in Season Two, as Dany seeks assistance from the Thirteen, the city-state’s rulers.

Scenes from the council chambers and the sinister and magical House of the Undying were filmed here, as well as at the nearby St Dominic monastery and Dubrovnik’s Rector’s Palace.