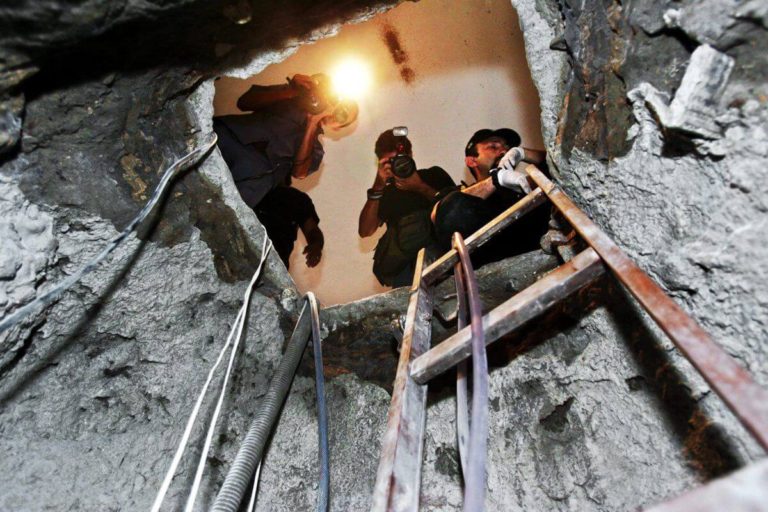 Bank robbery is the archetypal crime – a big building dedicated to keeping perishing great piles of cash in the vaults versus felons intent on spending said money on cheap whiskey, loose women, and shinier horses.

It’s big, brash, and bold. You don’t get many movies about mugging gangs, but every Western villain in Hollywood history was on his way to the local bank with a swag bag and a slew of dynamite sticks.

Here are seven of the biggest bank robberies in history!

With American soldiers on the outskirts of the capital, the family of Saddam Hussein started what is almost certainly the largest bank robbery in history.

It possibly stretches the classic definition of the bank robbery. There were no bags of cash bulging out of a freshly blown vault wall. Instead, the robbers – led by Qusay Hussein – had a note from Dad.

Dad, of course, was Saddam Hussein, who was still the ruler of Iraq in March 2003.

Qusay had a pal with him (possibly Finance Minister Hikmat Ibrahim al-Azzawi) to make sure the $920 million got safely into the trucks and trailers needed to move this sort of sum around.

It took about either two or five hours (depending on who you believe) to load up and drive away with their stash of $100 bills and possibly $100 million in Euros.

We all know that the cash didn’t do Saddam much good, as the former Iraqi president was executed on December 30, 2006. American forces killed Qusay in Mosul, along with his son and elder brother.

Finance Minister al-Azzawi died in 2012, shortly after being transferred from prison custody to a hospital.

In the chaos following the fall of Saddam’s regime, all sorts of Iraqi state property went missing (as is usually the case, no matter how well you plan your regime change).

Some of the central bank cash may have been driven across the border to Syria shortly after the raid. The $650 million discovered in the walls of one of the dictator’s ridiculously luxurious palaces may have been the bulk of it.

An Iraqi bank official summed up pretty nicely why this particular raid went so smoothly: “When you get an order from Saddam Hussein, you do not discuss it.”

Iraq’s continued misery has not been good for the central bank. In July 2014, as the militant Sunnis of ISIS rampaged through the country, there were disputed reports of $400 million being looted from banks in Mosul.

It’s back to Baghdad again. The Iraqi capital is the bank robbery capital of the world these days, and these guys have – as far as anyone knows – lived to enjoy their $283 million haul, or more likely, invest it in further bloodshed in that unhappy country.

This time, it was a private bank that was looted (probably by the guards paid to keep the money safe and almost certainly with the help of local militias).

Exactly why the Dar Es Salaam bank was carrying more than one-quarter-of-a-billion dollars is a mystery. Exactly how many men were involved is also disputed – though it seems clear they just opened up the vaults and did a runner overnight.

How they got away is another head-scratcher, though the involvement of militiamen could explain this.

In 2014, the world might have had its eyes on Fortaleza to catch Brazil’s opening game against Mexico as the country hosted the FIFA World Cup. In August 2005, the northern city hit the headlines when around $72 million went MIA from Banco Central.

This heist does very much fit the classic movie template, and indeed you can enjoy Assalto ao Banco Central if you don’t mind the reviews that called it “an action film without action.” There was a 25-strong gang, tunnels, an escaped mastermind…

The swag weighed in at an astonishing 3.5 tons. That didn’t stop the raiders getting away with it undisturbed over the weekend of August 6, knocking out the alarms during the raid.

They’d rented offices two blocks away and tunneled 78 meters into the bank, lining and lighting their tunnels as they went.

Eight people were arrested, and one of the supposed bosses was kidnapped – most likely by police – and killed. Moises Teixeira da Silva, another Mr. Big behind the operation, and an escapee from a 25-year sentence, has not been arrested and may indeed have struck again. Only R$20 million of the R$160 million has come home.

The bank decided not to insure the money because the risk was too insignificant to justify the premiums.

Well, you live and you learn I guess.

It’s good for bank robbers! With law and order frayed, to say the least, and guns everywhere, war-torn Lebanon was the perfect place for this politically-inspired robbery in 1976.

Some strange bedfellows came together to walk off with £25 million (probably around £100 million these days) from the British Bank of the Middle East.

Sadly, the Middle East of 2014 is no more peaceful than it was in 1976 when Lebanon was the crucible for vicious sectarian fighting that turned the name of Beirut – once one of the region’s finest and most open cities – into a sorry byword for shattered communities and wrecked streets.

It was Lebanon’s international openness that had made it the perfect place for the British Bank of the Middle East to set up its headquarters.

It was a lovely big prize for two of Lebanon’s combatant groups – the Palestine Liberation Organization (PLO) and the Christian Phalange. Joining the happy heisting party was Corsican mobsters.

The raid was largely the work of Abu Hassan, the man behind the massacre of Israeli athletes at the 1972 Munich Olympic Games. His PLO team blew their way into the bank. And then, they stopped. They couldn’t get into the vault.

With the country busy with other matters, the robbers were able to set up camp and send for help from Corsican experts. They made it into the inner sanctum two days later and started unloading the loot.

They did well: Lebanon had been prosperous, and the bank was stuffed with bullion, stocks and shares, financial paper, and the safety deposit boxes of wealthy locals.

The Corsicans were granted one-third of the total and headed off to the airport with a truck. The PLO flew their cash to Switzerland. Some of it no doubt went on with the struggle.

Some were allegedly liberated as far as Monte Carlo’s casinos.

Papers were apparently used for blackmail purposes that helped to finance the PLO for years.

Bank robbery has a funny way of uniting the body-strewn streets of the Middle East and the Bentley-lined streets of Knightsbridge, one of London’s poshest districts.

Valerio Vicci helped himself to around £60 million, estimated to be worth about $174 million in 2006.

Vicci, who died in 2000 after being shot by Italian police while committing another robbery despite being officially in custody, was an interesting character.

His father was a libel lawyer, and his mother owned a boutique. He had no need to go into crime.

Nevertheless, Vicci was stealing by the time he was 16.

At university, he took up with Fascists but soon decided crime was more glamorous than politics. After around 50 crimes in his home country, Vicci fled to Britain.

He loved the idea of being a master villain, an international man of mystery with a high-flying lifestyle. He thought he was fantastic- although those knew him spoke only of a dull, vain, arrogant thug.

For his biggest operation, he found an inside man, Parvez Latif. Latif’s cocaine use rendered him vulnerable, and Vicci made full use of him.

For such a spectacular crime, it was remarkably simple. Vicci and an accomplice asked to rent a safety deposit box in order to get into the vault and then produced guns, put a “closed” sign on the door, and cleaned the place out.

Police got his fingerprint and the rest of his gang, but Vicci fled the country successfully.

However, he came back to Britain to pick up a Ferrari for his new life in Latin America.

Vicci got 22 years, but was allowed to return to Italy to serve some of his sentence, where laxer conditions subsequently led to his release.

Taking in $30 million (around $100 million in today’s values), this could have been the perfect crime, had not the previously-unknown hoods who carried it out proved to be greedy/stupid enough to put the cops on their trail.

Even then, if they’d have done their washing up, they could have been in the clear with their loot from the robbery of the United California Bank Robbery.

The Dionisio family and pals were professional thieves (and by their own accounts very good ones) but acted well outside their usual stomping grounds in Ohio.

There were a pair of brothers, Amil and James, two nephews, Harry and Ron Barber, brother in law Charles Mulligan and a couple of unrelated hangers-on.

Amil was a whiz with alarms, and James was an explosives and tools expert. Charles was a driver. The team was given the job by a friend of the final two members of the gang, whose presence was thus forced upon them – they were just petty thieves.

They blew a hole in the roof of the bank vault and did a runner with the contents. And that would have been that. Indeed, such a huge score was enough to retire on, or at least inspire a period of laying low?

Apparently not. The Dimensions used the same MO back home in Ohio, and the FBI worked out that the two crimes were linked.

Flight records proved the whole gang had traveled to California (all on the same flight, silly gang!) and rented property there. The house yielded fingerprints that triggered a federal warrant, and the whole gang was rounded up and locked away.

Amil has now written an account of his life, which includes the tale of the 1972 robbery and the claim that the FBI acted illegally in apprehending the gang.

Those responsible for this £26.5 million robbery remain mostly uncaught (except one man jailed for money laundering). According to the British authorities, they may be linked to Republican groups.

The kidnapping of the family members of bank employees makes it particularly frightening.

On December 19 2004, two Northern Bank employees got a nasty surprise when gunmen turned up at their homes. They were separated from their families and told to turn up at work, as usual, the next day.

As a test run, one of the men, Chris Ward, had to take £1 million out of the bank and hand it to an unknown accomplice.

After the bank had closed, Ward and his colleague were instructed to let the gang in.

With Christmas just around the corner, the bank was stuffed with cash waiting to fill all those ATMs. The money was loaded into vehicles, and the mens’ families were safely released.

So much uncirculated cash was taken that the bank withdrew its entire stock of some high denomination notes from circulation and reissued them in different colors.

Fingers were soon pointed at the Provisional IRA, the only organization in Northern Ireland thought to have the skills to mount such an operation.

The Republican establishment – including the PIRA- has always denied any involvement in the raid and says the accusations are politically motivated.

Money from the Northern Bank Heist has since been found at a police sporting club – but most of it is still missing.

Ward himself was the only man tried for the robbery. He claimed he was being framed, and ended up being acquitted of all charges.