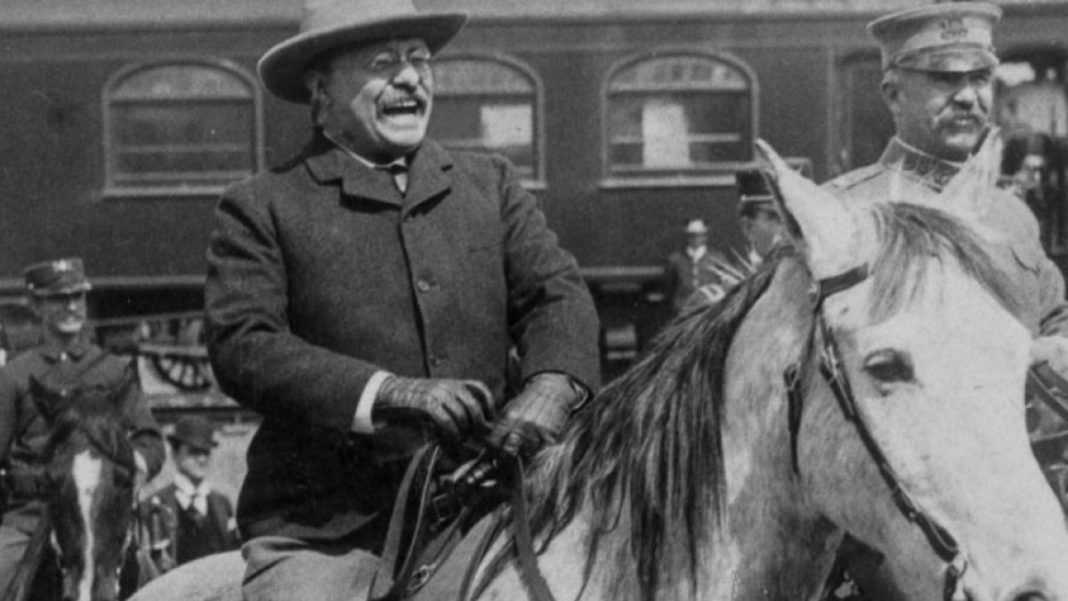 Theodore Roosevelt, the 26th president of the United States, is known for his many accomplishments. The Roosevelt we know was a boxer, leader of the Rough Riders during the Spanish American War, and a cowboy- in other words, the most interesting president in the world!

He doesn’t always drink beer…but when he does, he goes and builds the Panama Canal.

In all honesty, I could probably write an entire book on Theodore Roosevelt’s amazing exploits. But rather than risk universal panning from book critics, I decided on a powerhouse article instead.

So here it is, cooked fresh to order… 25 fun facts about Theodore Roosevelt!

Although the Office of the President requires a certain degree of austerity, I think we can all appreciate instances of pure humanity from the Commander-in-Chief. Here are some of the gems!

When Roosevelt seized the Isthmus of Panama without Congressional approval and moved forward with his plans to build the Panama Canal, members of Congress called for his impeachment.

Roosevelt’s response? “I regard the Senate as a collection of angleworms. If they do not like my leadership, they can impeach me.”

Theodore Roosevelt was the first president to ride in a car, fly in an airplane, and dive in a submarine.

Ironically, after his daughter Alice expressed the desire to travel in automobiles more often, he angrily yelled, “The Roosevelts will always be nothing but a horse family!”

3) That’s PRESIDENT Bull Moose to you…

At a Milwaukee campaign event in 1912, John Flammang Schrank shot Roosevelt in the chest at point-blank range before being immediately subdued. Roosevelt opened his speech with, “Ladies and gentlemen, I don’t know whether you fully understand that I have just been shot, but it takes more than that to kill a Bull Moose.”

He then gave his 90-minute speech and only accepted medical attention when he finished. Miraculously, his folded speech and eyeglasses case absorbed some of the contact from the bullet.

In 1889, Roosevelt moved to North Dakota to be a cowboy and became a deputy sheriff after rounding up a gang of outlaws.

5) Have one on the house

Theodore Roosevelt once entered a saloon in Mingusville, Montana, where a drunken local bully began harassing him. Calling Roosevelt names like “Four-Eyes” and going as far as to point a gun at him, the bully nevertheless found himself on the receiving end of a mean right hook from the future Commander-in-Chief. “Bully!”

During a hunting trip, Roosevelt encountered a lone bear cub and decided it would be barbaric to shoot it, so he didn’t. A journalist got ahold of this story, and a toy company got ahold of that story and created the first stuffed “Teddy Bear” toys we know today.

Roosevelt earned a new nickname due to this attention from the press and the toy company…Teddy. He grew to heartily despise that nickname for the rest of his days.

Theodore Roosevelt’s breakfast usually consisted of 12 eggs and several cups of coffee. Boys and girls, can you say “arteriosclerosis”?

I thought not. Me neither.

The Roosevelt-formed First Volunteer Cavalry (the one that charged up San Juan Hill without horses because they were accidentally left behind in Florida), was Teddy’s pride and joy.

From college athletes to farmers to Ivy League scholars, this ragtag group of volunteers received training from a career military officer and became the most distinguished fighting force in the Spanish American War.

Theodore Roosevelt actually went on tour with the troop, announcing every arrival with a bugle call.

While sparring with heavyweight boxing champion John Sullivan, Roosevelt took a shot to the face that left him completely blind in his left eye. The president kept this injury from the public for years.

Theodore Roosevelt, like Calvin Coolidge and many other presidents, loved animals. The White House was full of unusual pets– the Roosevelt family zoo consisted of dogs a lion, a zebra, a parrot, several bears, a hyena, rats, a coyote, a couple of alligators, snakes, a few horses, and a one-legged rooster.